Here is a summary of data based on a questionnaire (conducted between May and July 2020). However, the data shown here is only a rough guide and shows a trend. If you would like to know more about the specific situation, please go to the VOICE page and read the victims’ voices.

What kinds of sexual violence are there?

How many cases of sexual assaults have occurred while studying abroad? 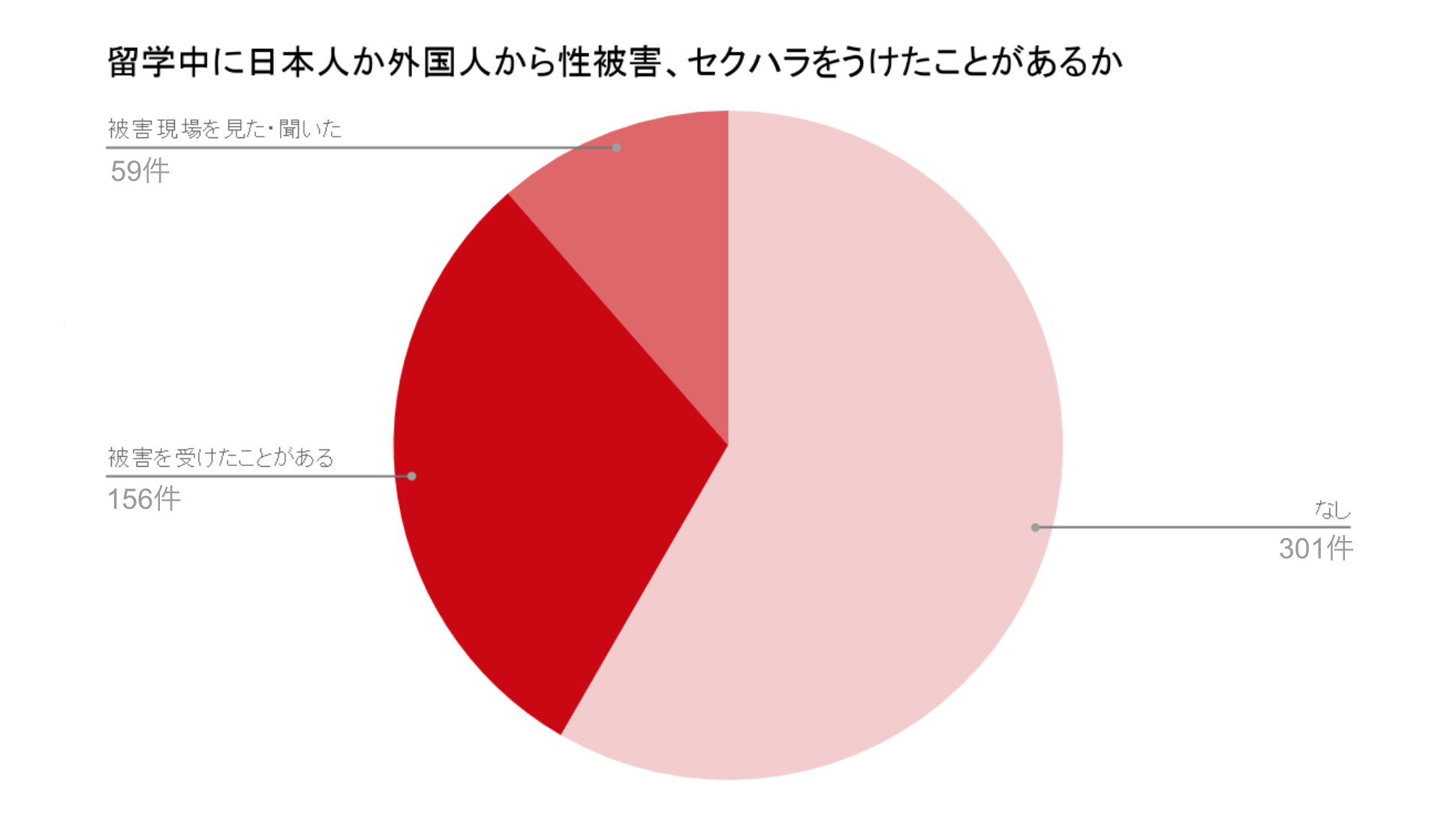 There were 59 cases of third parties who had seen or heard about sexual violence in their study abroad destination. There are probably more unreported cases behind the scenes.

In what areas do sexual assaults occur? 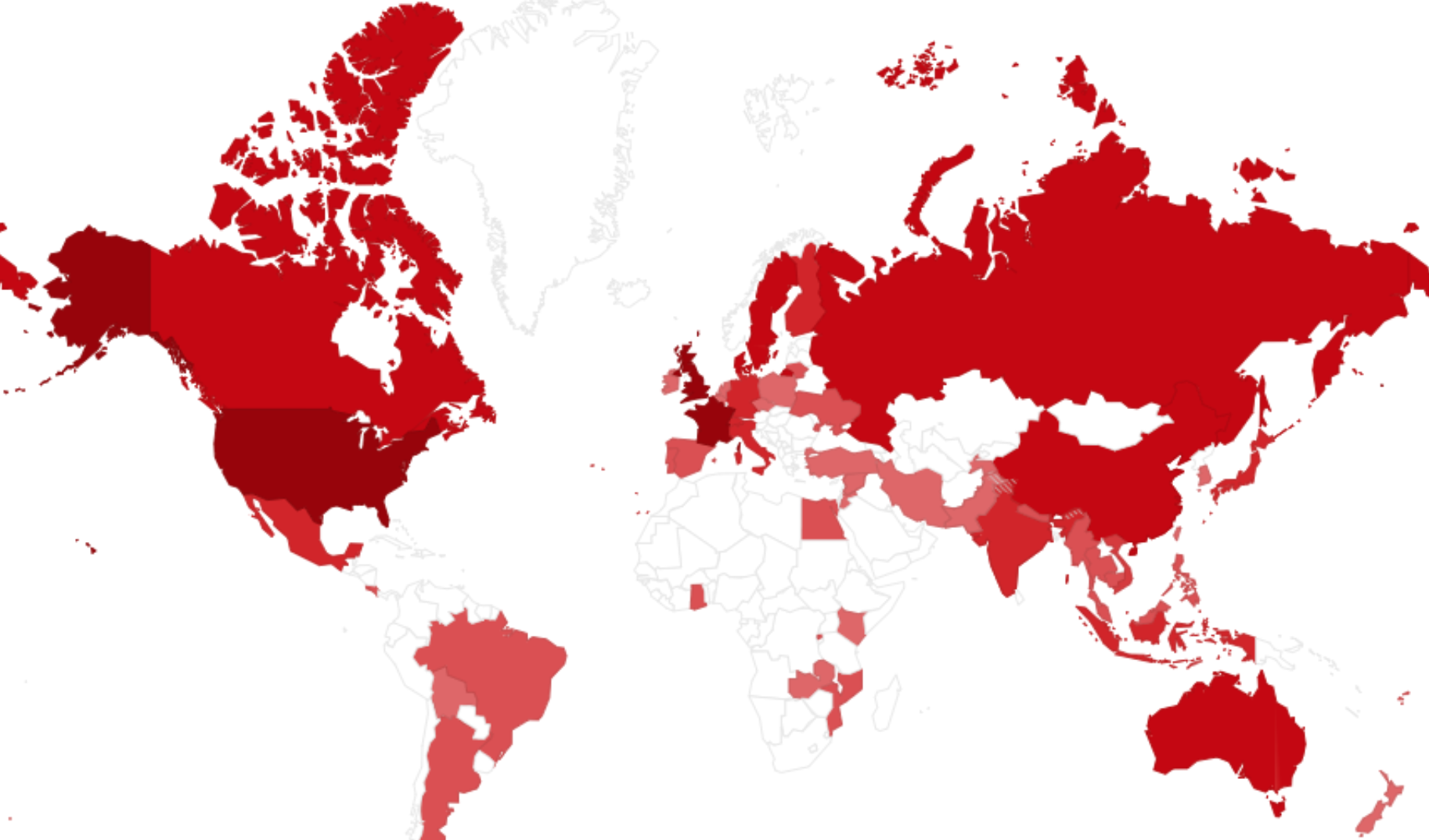 Sexual violence has occurred in all countries without being biased toward anyone continent: Europe, North America, Asia, the Middle East, Oceania, South America, and Africa.

The majority of victims were in Europe, North America, Asia, the Middle East, Oceania, South America, and Africa because the number of students studying in each region differs. Still, there are also a certain number of victims in other areas such as Africa.

Among the reported cases in such places where strong ties within the Japanese community exists since few students study there, offenders took advantage of their status and relationships to commit sexual violence. In some cases, the relationship’s pressure promotes the perpetrator to deprive the victims of their ability to resist even in the absence of assault or threats. In other words, an influential person comes at you with force, and you cannot escape. They pretend to be kind and take advantage of your weakness. Overseas, especially when studying abroad for the first time, everyone is vulnerable to ゙ information. Still, there were many victimization cases in areas where there is little precedent for study abroad, targeting students in such a weak position.

What is the gender ratio of the victims? 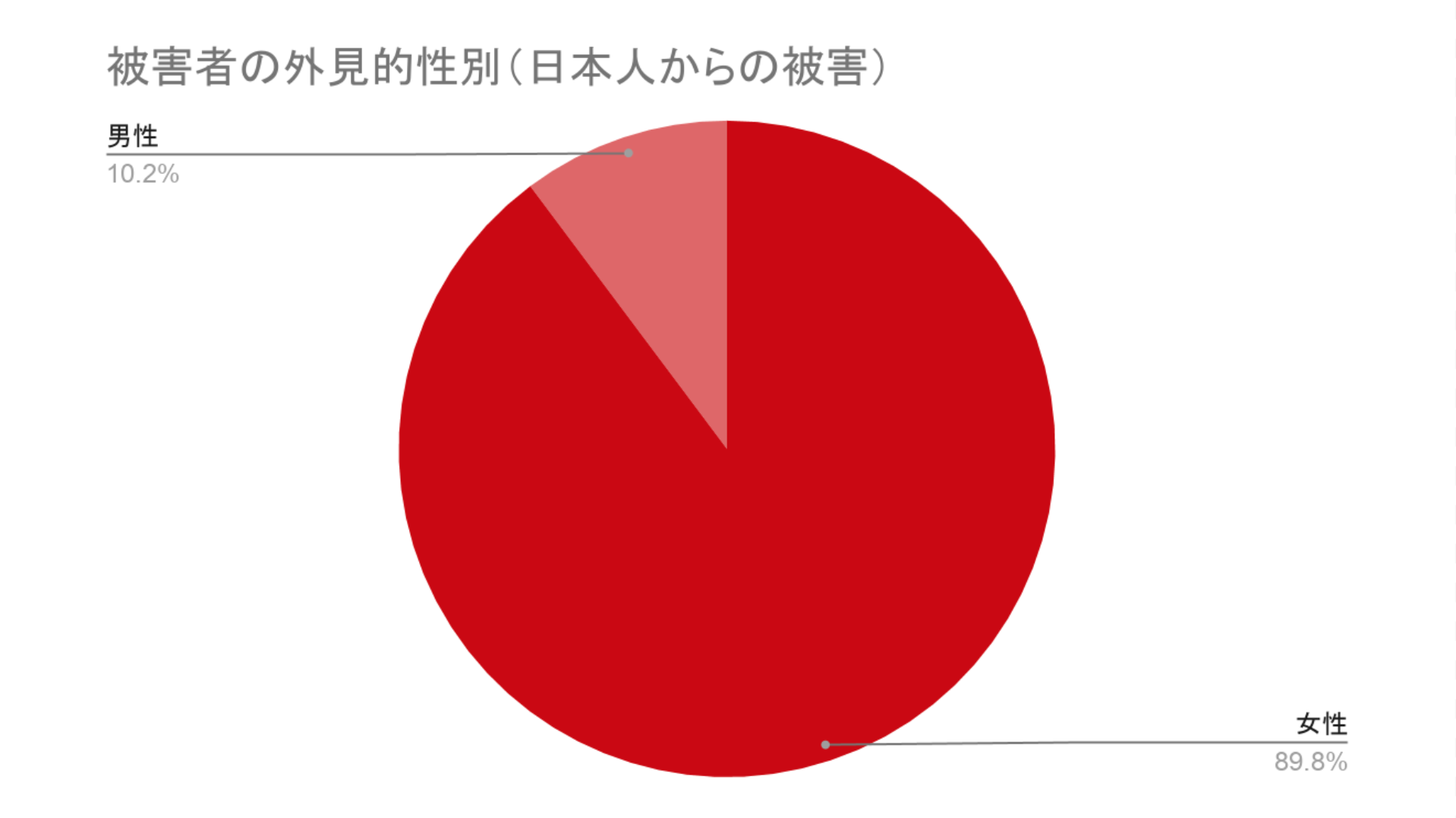 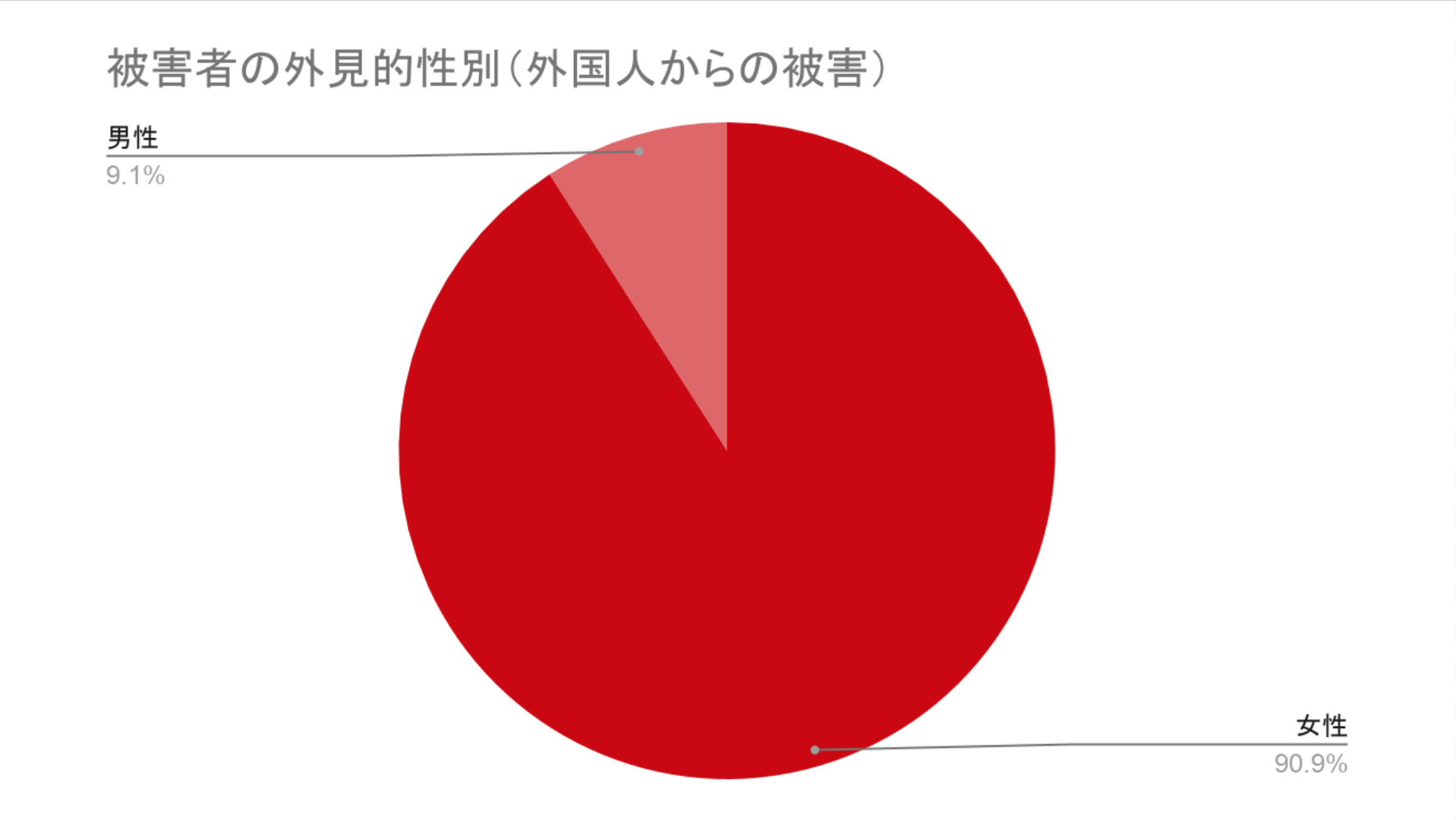 In all cases, the victims were dominantly female.

The ratio of male to female victims of sexual violence is about 1:9.

It can also be inferred that both men and women are victims.

What kind of person is a sexual perpetrator in study abroad? 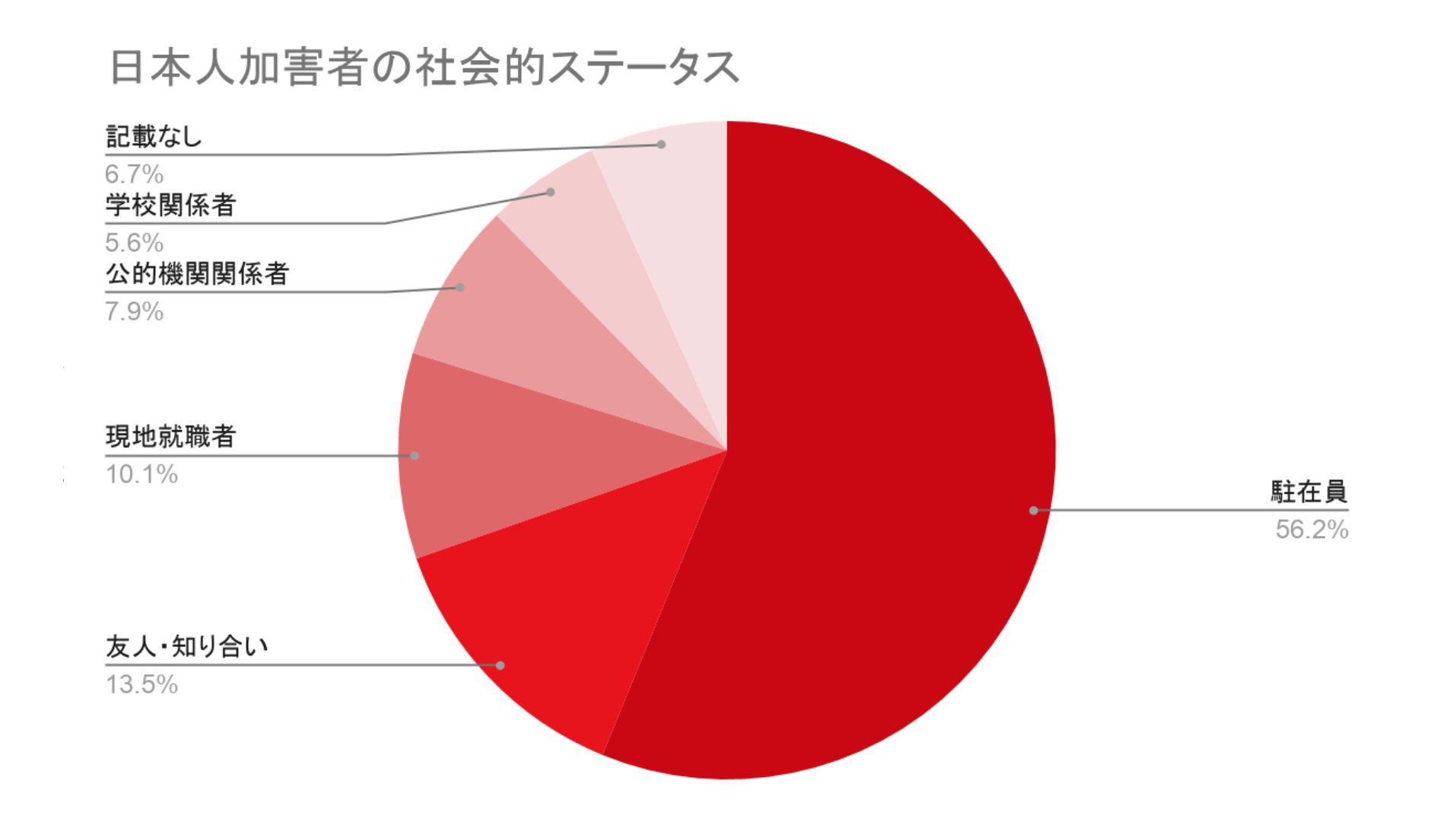 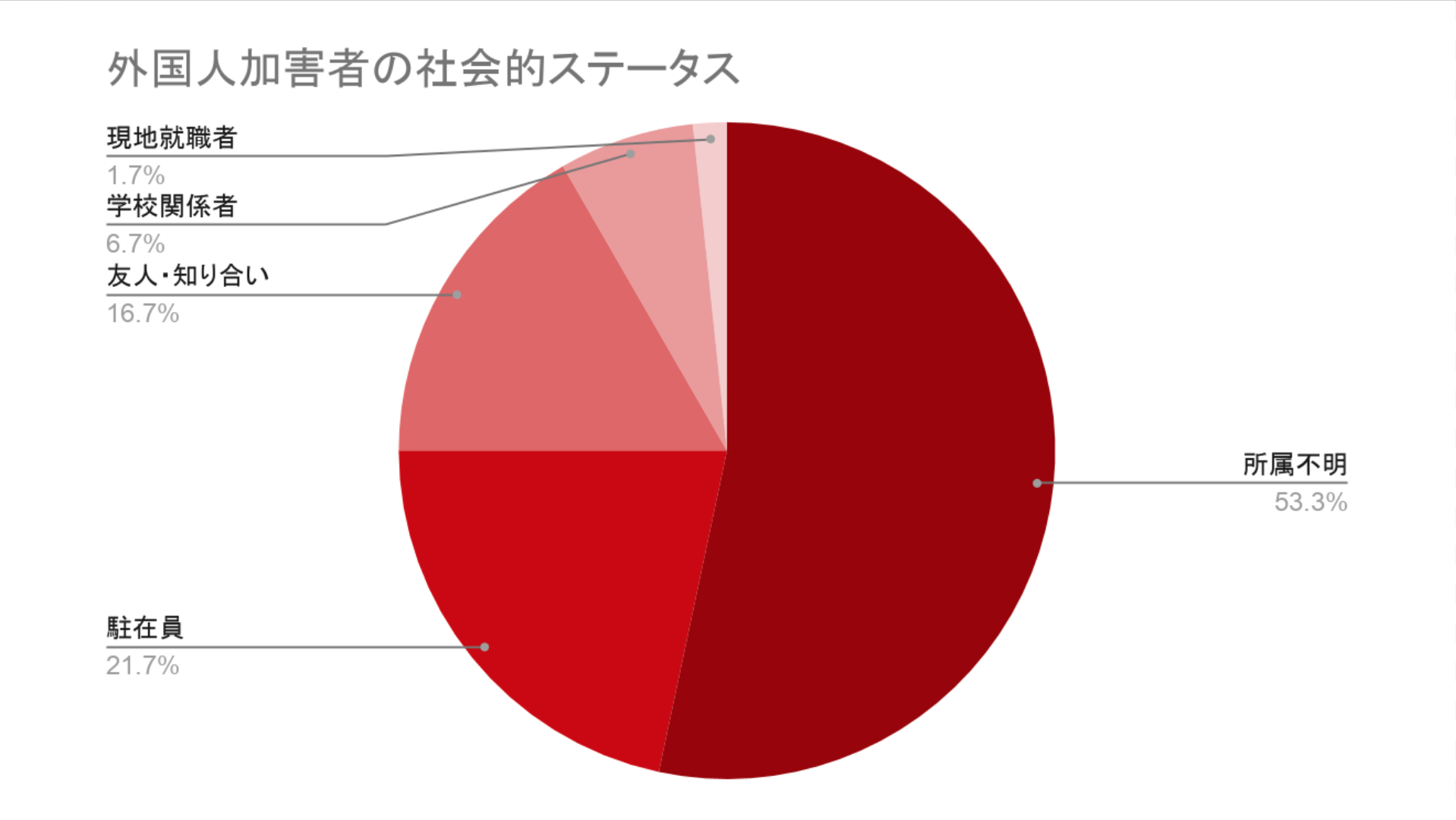 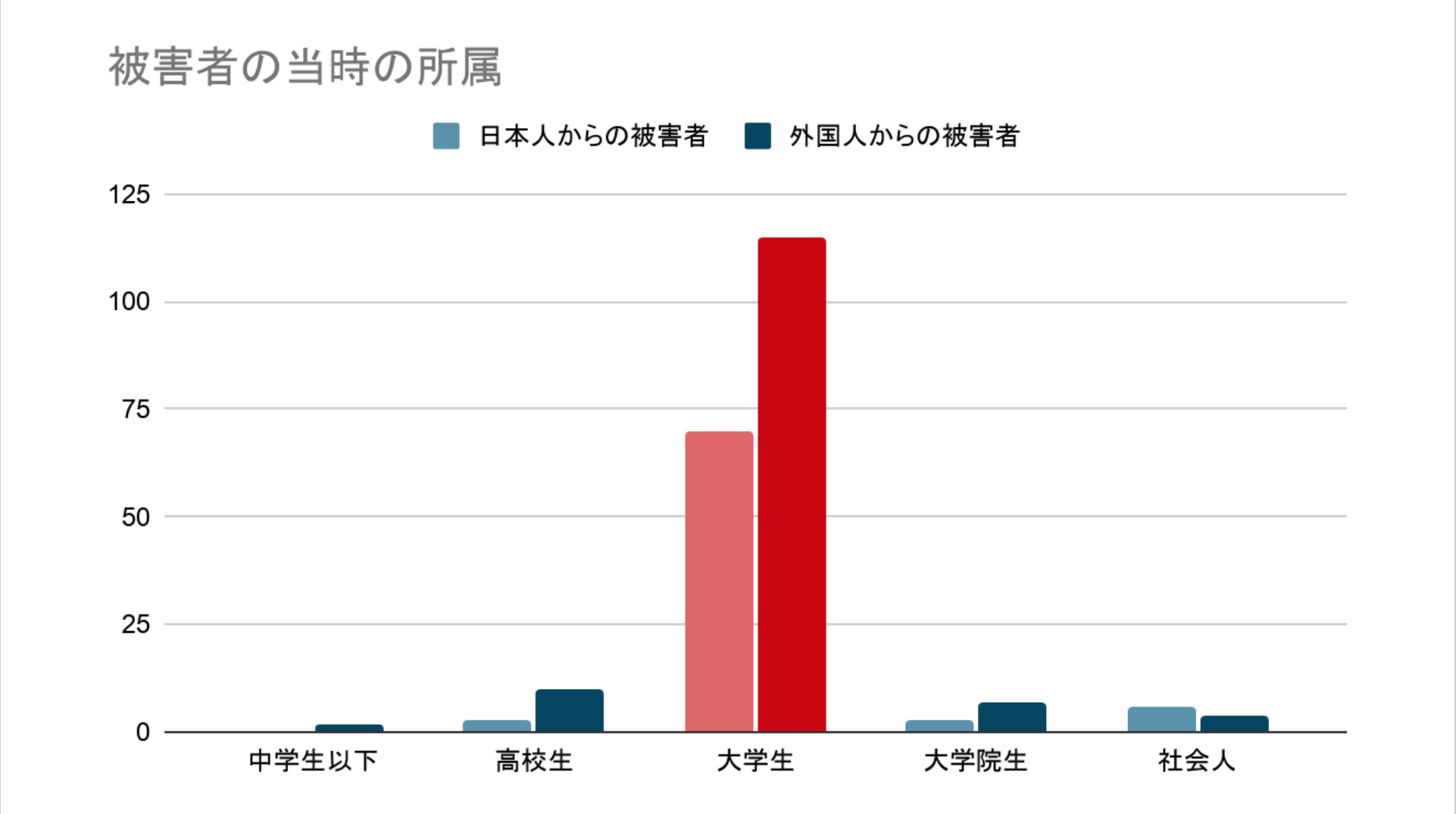 In many cases, when the perpetrator is not from the local community or Japanese, it has not been possible to determine the perpetrator’s affiliation. However, it should be noted that the category of “acquaintances” also includes “host families,” who are supposed to be trusted by students.

When you were sexually assaulted, was there anyone you could ask for help? 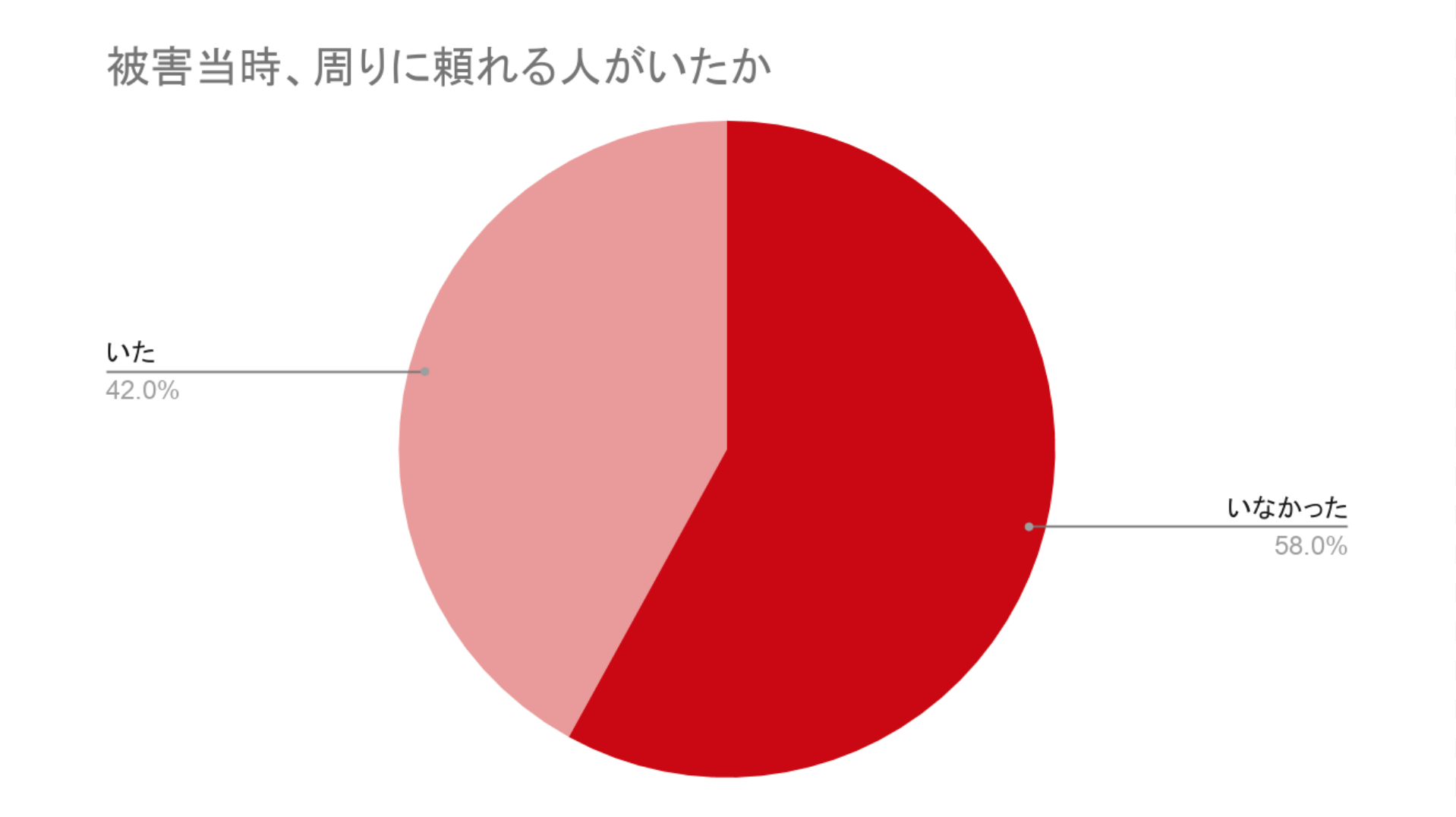 Sixty percent of the respondents answered that there was no one they could trust.

Students often do not have acquaintances or people close to them during study abroad, making it difficult for them to solve problems immediately.

From the survey, it can be concluded that more than half of the respondents had no one to ask for help, so they were left to cry themselves to sleep.

How are sexual assaults during study abroad different from those in Japan? 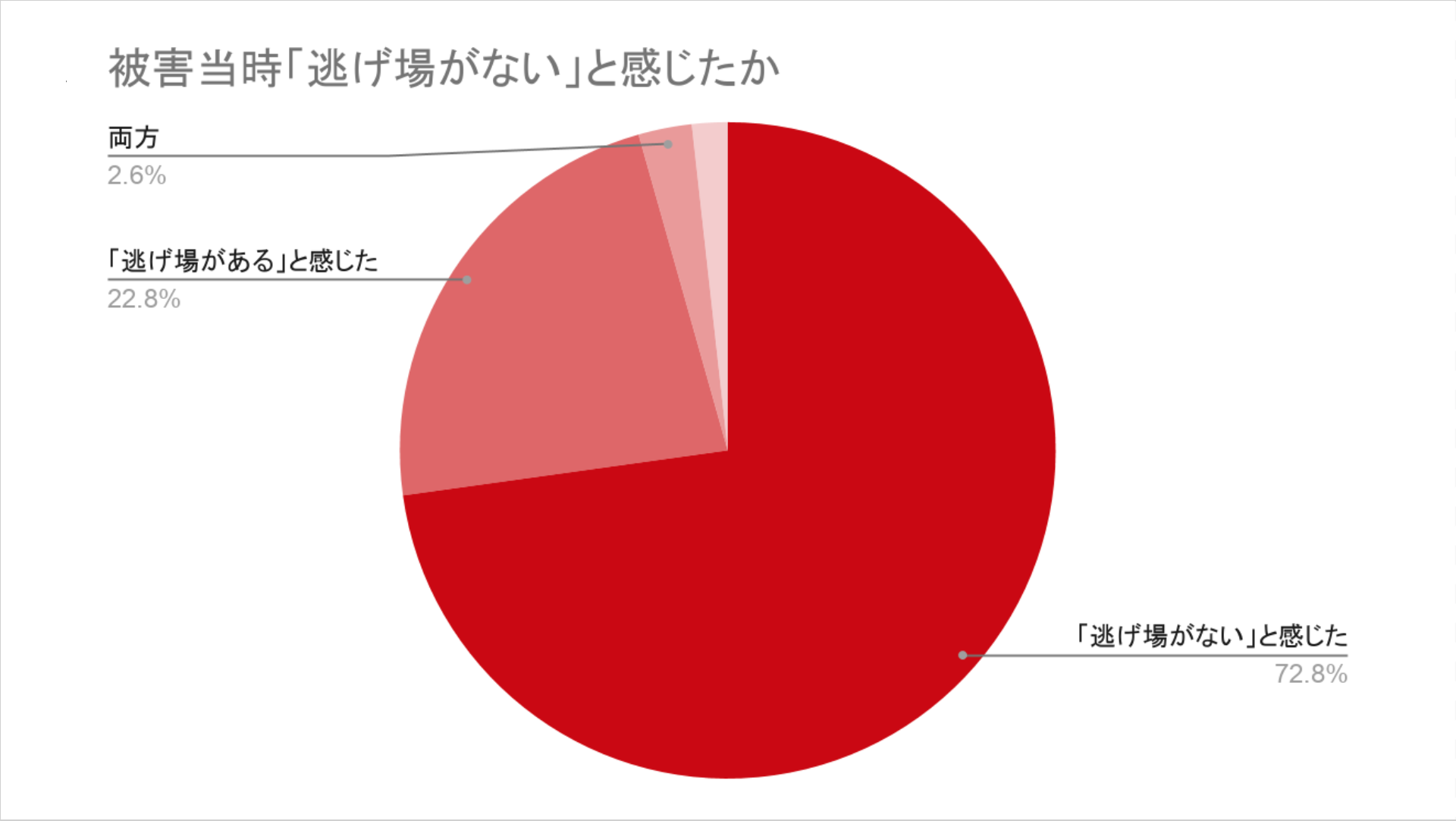 Due to the peculiar circumstances of studying abroad, about 30% of the victims felt that they had no place to escape when they were victimized. Especially when the perpetrator of sexual violence was Japanese, the complicated relationship with the Japanese community in the study abroad destination made some students feel that they had no place to run to in case of emergency. There are few hotlines for students, and students do not know who or what to consult after being victimized and often end up crying themselves to sleep more than if they were sexually victimized in Japan. Besides, universities and study abroad mediators have little guidance and communication about sexual assault before studying abroad. However, students do not have prior information and do not know how to deal with sexual assault. Moreover, the access to medication such as after pills in many countries is different from Japan’s.